If you have been reading any of the other posts on this blog, you have probably determined that I like cucumbers. Apparently, my family does too. My kids are always happy to eat them, and if they don’t I am happy to do so also. Most of the time when I grow a new variety of cucumber (often a Carosello) my wife says something like, “These are the best cucumbers you have ever grown”. When I remind her that she has made that claim about a previous cucumber variety she will respond, “Well these are better than the last ones”.


Saving cucumber seeds is also very important to me. No, I am not obsessive and no I am not hoarding seeds. Rather, I am preserving the cucumber varieties that are worth keeping, but are not being preserved because they are better suited for the home gardener than for long-distance shipping to grocery stores. Saving seeds is an important skill that is worth both learning and teaching to others.

With patience most gardeners can learn how to produce high quality seed from their cucumber vines. With the Carosello, three of the factors in determining when the fruit is fully ripe and the seed is ready to extract include watching for a change in the color of the fruit, smelling the aroma of the fruit and gently shaking the fruit while listening for the slushy sound generated by the inner contents.


While I have much to learn about cucumbers, I continue to be fascinated by the growth, color, shape and beauty that are exhibited by each cucumber variety.
Posted by Jay at Thursday, September 19, 2013 6 comments:

For those of you who are not familiar with what a Carosello is, Carosellos are cucumbers that are are a melon botanically and a cucumber agriculturally. This means that they grow like a melon but taste and are eaten like cucumbers - only better! The plant and fruit grows relatively quickly and they are really enjoyable to grow.


After trying out the regular round or “Tondo” Carosello Massafra I decided to try growing the Tondo Massafrese. The fruit of the Tondo Massafrese is just like the regular Massafrahttps://cucumbershop.com/product/carosello_tondo_massafra/ in shape and taste, except that it has light green splotches on dark skin (or in some cases dark green splotches on light skin). The taste is sweet and savory, yet slightly crunchy.

Early fruiting plants can sometimes give all their energy to the first fruits and end up with small fruits or dying early because their fruit growth outpaced their leaf growth. As a result, fruiting plants often produce fruit with large, vigorous seed. Another benefit of plants that produce fruit later on the vine is that the fruit is easier to trellis and keep from slugs or other pests that may be able to eat fruit left on the ground. The Carosello Massafrese is a good cucumber to trellis as my large fruit neither broke the vine or damaged the plant in any way.

I would highly encourage anyone who enjoys cucumbers to try growing the Carosello or other cucumber-melon varieties. They are bitter-free, easy to digest and delicious.

This variety is now available at Cucumbershop.com.
Posted by Jay at Wednesday, September 18, 2013 7 comments:

In between growing two other varieties of Carosello this last summer I decided to grow out a few seeds of another variety called Carosello Tondo Barese. Tondo refers to the fruit being round. There is definitely a correlation between cucumber growth and the amount of organic material in the soil, because the plants I planted in more fertile soil grew much faster than those without the more fertile soil. 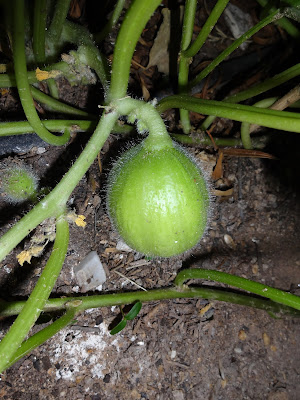 Based on growing so few plants of this variety I didn’t get as much of a chance to taste this variety as much as observe it. Over time I have noticed that some Carosello varieties tend to fruit closer to the stem (which I believe is better for short-season gardens) while other varieties tend to fruit farther from the stem. The Carosello Tondo Barese definitely set fruit closer to the stem, which is something very helpful to know when growing this variety in the future. Though an early set of fruit can be adventitious, I believe that there are equal benefits to how the fruit sets, no matter what climate you live in. 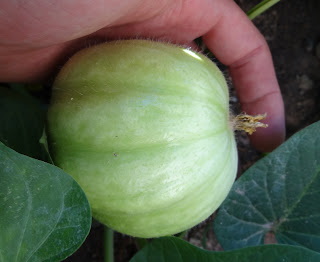 Of Mediterranean Mantises and Mesquites

After a post about Mexican Bean Beetles I would like to focus attention on a more friendly insect. The Mediterranean mantis. 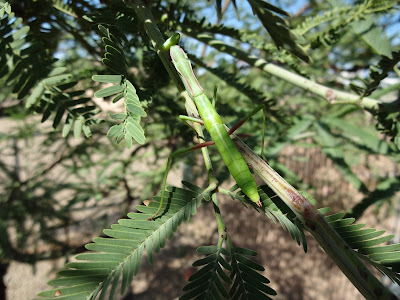 Based on how much the Mediterranean mantid blends in with the native mesquite trees it is no wonder that they have come to dominate much of the local insect population. 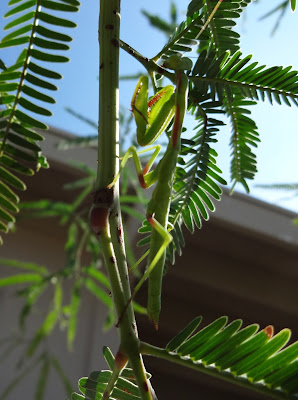 Often, people encounter this insect is when a male is attracted to a porch light and, while there, decides to dine on other insects that are attracted to the light. 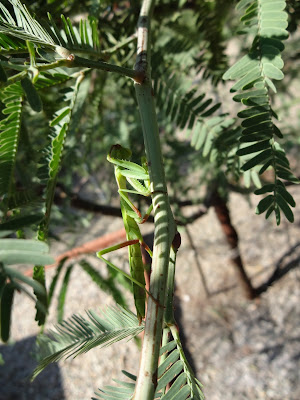 As Arizona’s monsoon weather patterns draw to a close between the end of August and the beginning of September, Tucson’s insect population reaches its peak. Every insect pest from every other gardener’s plot has had all summer to reproduce and delights in finding a new habitat to call home. Unfortunately, many local gardeners either don't know what to look for or do not tend to their garden often enough to notice the insects destroying their gardens - because there are always plenty of insect pests to deal with in the Tucson city limits.﻿﻿﻿﻿ ﻿﻿
﻿﻿ ﻿﻿
﻿


Along with a variety of cucumber beetles (which come in all colors and patterns) this summer the monsoon winds have brought another unwelcome guest to my garden: the Mexican Bean Beetle. My experience with this pest has led me to believe that this beetle prefers sweet potato vines over beans, melons, or squash – but that it will go after any or all of these plants if given a chance.

﻿﻿﻿﻿ Although my sweet potato vines have more to fear from my beloved children tromping through them than from a little beetle, I have no intention of making this insect a reoccurring visitor to my garden.
﻿
﻿


The beetles look similar to ladybird beetles, but are much larger, with an orange coloration. Their clumsy and slow habit leads me to believe that, like horse lubber grasshoppers, that they may be poisonous. I kill or remove as many as I can, as I find them, though they do tend to live beneath the leaves – which makes them nearly impossible to find among the sweet potato vines.

So – if you happen to see one of these beetles roaming around in your garden please don’t pass it off as a ladybug. Eliminating menacing insects not only helps you, but is an invaluable benefit for all the gardeners who live around you. I can only hope other gardeners in Tucson take note.
Posted by Jay at Tuesday, September 03, 2013 1 comment: