To ensure acceptable consistency and marketability in fruit production, conscientious seed savers must work to select fruit and plants that express desirable traits in order to ensure that these traits continue to be expressed in further generations. Though a small amount of variation is generally accepted by gardeners and farmers that work with open-pollinated varieties, variability in multiple areas of plant and fruit growth as well as in fruit quality can make the seed less valuable. 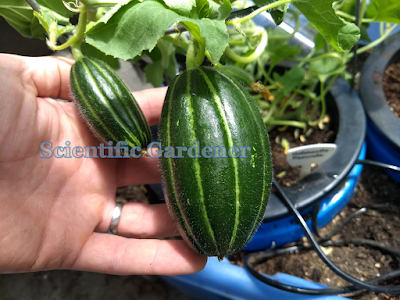 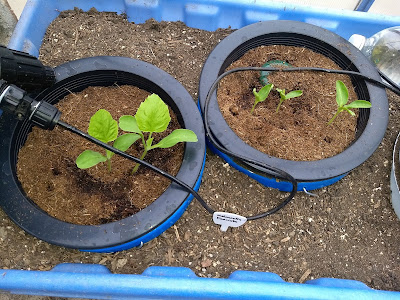 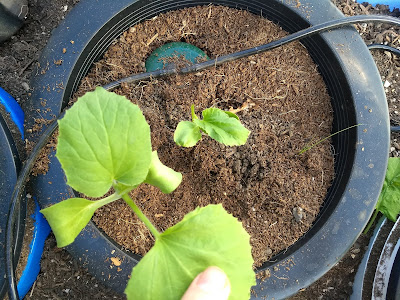 One vegetable variety I have been working to reduce the variation in is a C. melo carosello variety I referred to as “Meloncella Fasciata” last summer. As you may recall, I was super excited about what I termed the banded Meloncella. Though the second grow-out I did with this variety turned out to be all round (just like the Tondo Massafra in appearance) I was able to save seed of the oval fruit I had grown. From this point on, I will refer to this variety as the Carosello Tarantino. When saving seed for a specific trait, it is important to remember the variability of the original population. The traits that were expressed during all my grow-outs of the Medium Long of Tarantino up to now included fruit shape (cylindrical or round) and fruit color (solid striped or blotchy). When I refer to blotchiness, I mean that the outer dark stripes are interrupted with patches of light-colored flesh. While I saw some blotched fruit at the beginning of growing out this variety, I wasn’t worried about blotchiness being a significant trait because I saw minimal blotchiness on the fruit I saved. However, because all of the second grow-out from 2018 was round, fruit shape would be a major factor to isolate.


Before saving seed for this variety last year, I sorted the fruit based on their shape. The most oval fruit was sorted as an A and the most round fruit ended up near the letter E. Although I would normally have picked A, I felt that I should plant seed from the fruit that was labeled “B”. 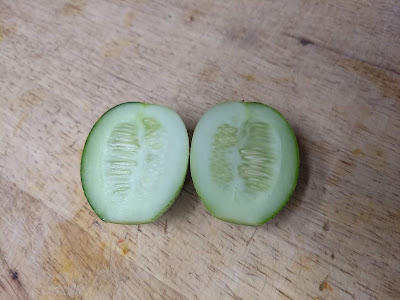 Because all of the fruit that I grew from the parent plant was initially cylindrical, I knew that my chances of getting cylindrical fruit was at least 50 percent. I decided to dedicate two hydroponic baskets with my reservoir buckets to this variety. One of the baskets had an EasyOlla while the other did not. I figured that the one closest to the greenhouse door would be the easiest to hand-water. 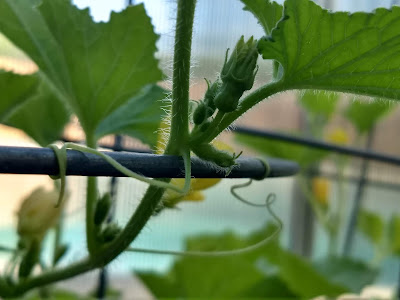 Since last year’s fruit had produced very healthy seed, the seedlings that grew from them were very vigorous. I let the plants do their thing and culled any plants that grew poorly in the soil. Sure enough, one pot produced round fruit. Though the fruit was tasty, that was not what I wanted. Instead of waiting around to see if it would produce more cylindrical fruit the second time around, I pulled the round-fruited vine to reserve more light for its neighbor. 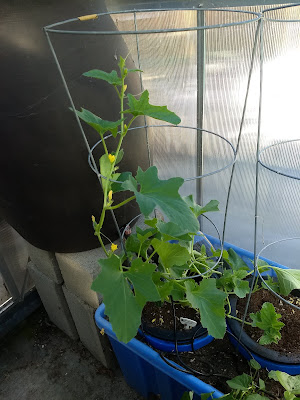 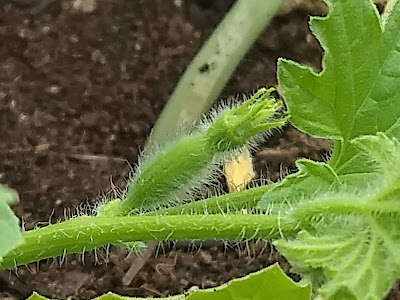 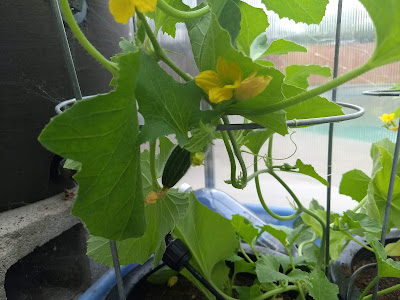 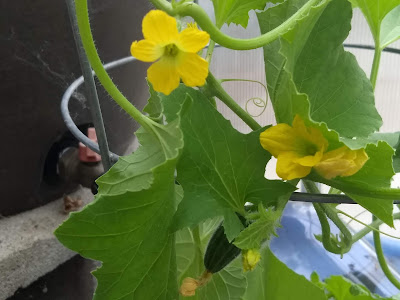 As all of the greenhouse plants grew, the cylindrical fruiting Medium Long of Tarantino plant – which happened to be the one closest to the greenhouse door – performed much better than the other plants. I believe that much of this is related to overwatering the EasyOlla overwatering some plants. 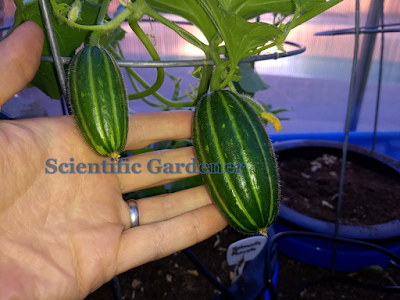 I’m very grateful that the one plant I needed to get seed from the most was not affected by this mistake. One of the things I appreciate most about growing in the greenhouse is that I can isolate individual plants in order to ensure that there is no cross pollination. Without a physical deterrent, bees would normally cross-pollinate my cucumber-melons, making it extremely difficult for me to select for a specific trait. When growing in the greenhouse, I hand-pollinate each of my female flowers with male flowers on the same plant. In some plants, such as corn, this would cause a problem known as inbreeding depression. Though inbreeding C. melo is not the best practice for long-term seed health, the vigor of C. melo seed saved from inbreeding is very high. 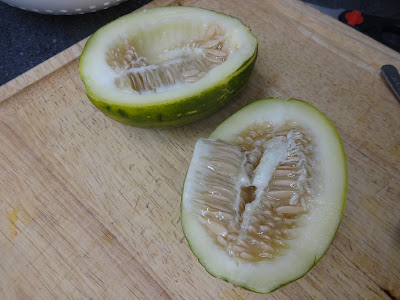 Close to the end of the growing-out of this variety I made a few major mistakes. One was that I overwatered the plant enough that all but one of the fruit on the vine aborted. I am grateful for the one fruit that I was able to save seed from, because it enabled me to take advantage of the isolation required to select cylindrical fruit for my next grow out in the garden.

On one final note: Here is a video of this variety when it was flowering. They are quite impressive in their female flower production at this stage.


One variety that is often mixed up is the Carosello Tondo Manduria or – what I refer to as the Mandurian Round. This variety can come either as light and larger or speckled and possibly a little smaller. The two varieties can often get mixed up in the seed packets. Additionally, my Italian friend Giuseppe has informed me that there is another variety that is very similar to the light one.


In any case, when growing out this variety, I like to know that the seed I am growing produces fruit that is true-to-type. Like most gardeners I know, I like to trust that what I am growing is what I’ll get. This Mandurian Round is one of the few varieties that developed just I had hoped. I was so grateful for this. I’m thinking of possibly reserving one of my plots this upcoming year for a growout of the Mandurian Round. Each time that I save pure seed, I increase the genetic stability of each of my home-grown varieties. One huge reward of being a wise steward with each cucumber variety I am entrusted with is that it me enables me to better appreciate all the work involved in the initial breeding each of these beautiful and delicious carosello cultivars.

From most all of what you see on my blog, one might begin to believe that I prefer Italian cucumbers above all else. Not true! In fact, I am always looking for new and different cucumber-melon varieties from anywhere in the world. 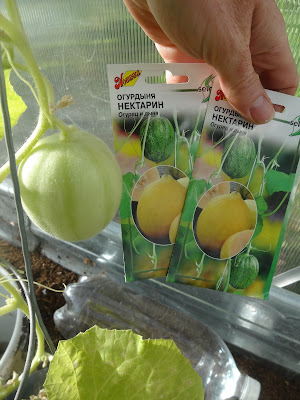 That brings me to this variety. Though I have become quite advanced at butchering the pronunciation of many Italian Carosello varieties, I don’t even try to pronounce this. If someone who speaks Russian can tell me how to pronounce it and what it means, I’ll gladly update this post to include this important information. 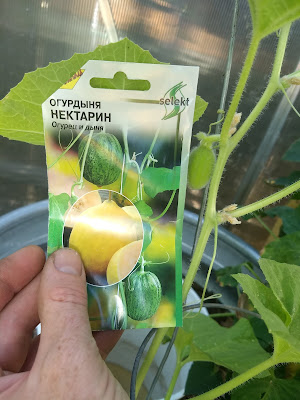 I grew this one after the Zorzi Carosello Leccese in the same spot. It grew pretty well and produced fruit. I’m not really sure what to think of the fruit other than it looks like a type of Mandurian or some other light carosello. If you would like to purchase this variety online and try it out, please do. 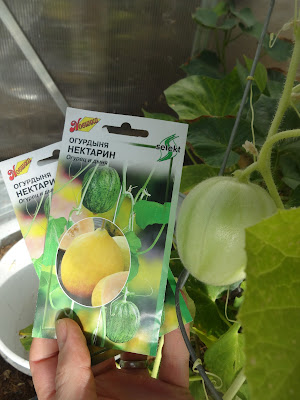 Germination was good – no problem there. As with many seed packets I get, this variety just lacked in the area of “picture matches the end product”. I’m even happy to have kept trying this variety, if I didn’t have many other light round carosello varieties to choose from. My overall take on this Russian carosello variety was I would grow it if I didn’t have anything better. 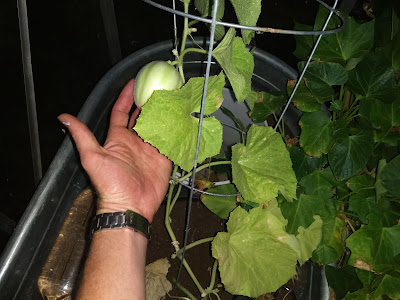 So, last year I used EasyOllas to grow out my garden, while this spring I started with both the EasyOllas and the bucket reservoirs. I quickly found out that, past the first set of true leaves it is best to ease off the Ollas, if you already have a water basin under the plant.


I started out my garden around the last week of March. In many of the early pictures, you will see 2 liter bottles or other containers. Early in the season, water-filled jugs can be invaluable. They provide a free source of radiant heat when they are exposed to sunlight during the day and exposed to cooler air at night. This radiant heat was able to keep my plants warm despite less-than-ideal conditions outside the greenhouse.


As with all gardening experiences, I also had some other learning opportunities. Without proper soil health strange things can (and do) happen. Some of my plants did not care for my less-than-fertile soil and grew a little strange. Once I improved the soil fertility by adding some healthy compost, the health of my greenhouse plants greatly improved.

After removing the EasyOllas from the baskets, I decided to plant out my sweet potatoes in the margins between the buckets. This enabled me to make the most of my greenhouse space.

Eventually, when I needed to take trip, I had just removed my first crop of striped Carosello Leccese from the garden. Because there were no male flowers on the new transplants, there was minimal chance of cross-pollination of the mature greenhouse plants with new transplants. I was able to lift the baskets with plants in them and put them in buckets in my patio area where would receive partial sun while I was away.


Though there may have been some minimal cross-pollination between the greenhouse plants during this time, I’ve never seen honeybees (my main pollinator in this area) flying around the patio area. I hope you enjoyed
Posted by Jay at Friday, April 17, 2020 No comments: