﻿
Though I usually have a lot of good to say about the veggies I grow I had mixed emotions when I recently harvested my tepary beans. These beans were obtained through the Pima County’s Seed Library. The package they were in was only labeled only as “tepary beans grown in Tucson” and had no reference to what particular cultivar of tepary bean they were. Their bushing habit would definitely enable them to support each other if grown in an open area.

One positive thing I have to say about this variety is that it took the heat very well and was well adapted to my climate. Tepary beans are native to the Sonoran desert, so I wasn’t too surprised by that. Another positive trait was that the plants produced a nice crop of beans given the lack of space and time I provided for them to grow. Only a few small plants grew in a limited space with partial sun.

So – why did I pull them out? One of the traits of the tepary bean is that it can carry common bean mosaic virus without significantly affecting the tepary bean. Unfortunately, this virus affected my pink-eyed purple podded beans – which did not have mosaic until the tepary bean plants grew larger. My tolerance for disease in my garden is zero. This means that the beans were removed, pods and all, along with other infected plants and all bean debris was promptly deposited in the trash. If I lived in a rural area I would have just burned it.

Another negative side to this bean is that they are primarily useful as a dry bean. This is because the beans do not grow large enough to eat until the seeds in them are large enough to harvest. 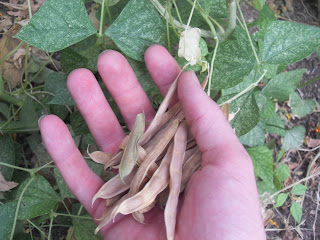 I saved the majority of the seeds for the seed library – something that is part of the deal of “borrowing” seeds is that you bring more back. However, due to the fact that the majority of the legumes I grow are susceptible to bean mosaic I will most likely never grow this variety again. 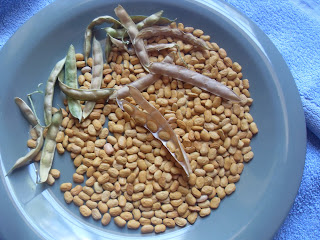 Email ThisBlogThis!Share to TwitterShare to FacebookShare to Pinterest
Labels: Beans