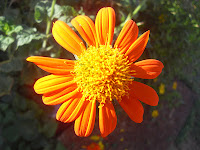 Last winter I planted some seed of Mexican Sunflower in my garden near some Jerusalem Artichoke and some Yacon to see if it might do anything. All three of these plants are tall and flowering. I utilize them on the west side of my garden in order to provide afternoon shade for plants such as tomatoes and peppers (both of which have already surrendered to disease). When the Mexican Sunflower first came up I thought it was Yacon because the leaves looked very similar.

The Mexican Sunflower plant does very well in my climate and grows quickly – the plant enjoys the heat much more than the Yacon does. However, this year it has really taken a beating from the spider mites.
﻿﻿
﻿﻿

Spider mites are a plant-eating mite that can attack many plants in the garden. With their webbing and small size, spider mites are often difficult to completely get rid of. I also have some beneficial insects that live in the same area, so I am wary to do too much to try to kill everything off.
﻿
﻿

This is the first non-vegetable plant that I have grown in the last few years. It is nice to pick some Mexican Sunflower and Jerusalem Artichoke flowers for my wife. She enjoys the colors in our kitchen.
﻿
﻿
Posted by Jay at Monday, July 23, 2012

Email ThisBlogThis!Share to TwitterShare to FacebookShare to Pinterest
Labels: Flowers