Reader Beware – I am about to breach a very controversial topic, of which there has been some research already done, but none that has been done with field trial of weak seed, so I thought I would just put this out there. The topic is “seed orientation”.

While I don’t believe that which way a seed is oriented matters when one is dealing with fresh healthy vigorous seed, I do believe that it is a very important factor when planting weaker cucurbit seeds. I have found that the problem with the majority of weak/older seed is that they have trouble shedding their hard outer seed coat. Planting the seed with the radicle facing downward only exacerbates the problem. The seedlings emerge from the soil, unable to push their seed coats off and eventually die from being starved from the inability to photosynthesize because the seed coats are now dry and the struggling seedling has to push it off without having anything secure the outer covering to pull out from it. I prefer orienting seeds with the radicle facing up at a 45 degree angle, with soil compacted on top of the opposite side of the radicle, so that when the root emerges from the seed and the seedling attempts to remove its leaves from its outer covering, the seed coat is lodged firmly in place so the seed can pull out from it. Orienting my seeds this way has provided me with a much higher survival rate and much earlier root emergence-to-photosynthesis-time than other methods. 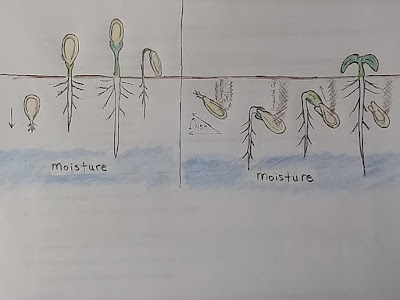 I have included a picture to illustrate my thoughts with the left side with illustrations of what I have observed when orienting seeds with the radicle facing downward and the right side with illustrations based on what I have observed when having the radicle facing up at an angle and with soil compacted onto the opposite side to lodge the harder seed coat in the soil.

If anyone else has strong feelings on the matter, please let me know. I would love to run an experiment with a batch of very consistent fresh seed to see if I can provide hard evidence to an advantage in the time required to have the seedling shed its seed coat. (Edit: I wanted to also let you know that I often pre-sprout my seeds enough for the roots to have already emerged before placing them in the soil like this)

Email ThisBlogThis!Share to TwitterShare to FacebookShare to Pinterest
Labels: Seeds